First, a quiz: What do these states have in common? 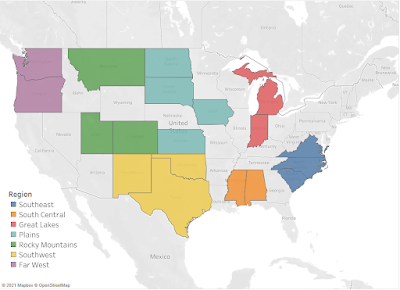 (Hint: Regular readers of this blog will already know the answer.  And you will too, shortly.)
The prompt for this post is generated by friend and colleague Akil Bello, who, apparently while watching college football the weekend after thanksgiving, tweeted this question:

The answer is multi-faceted and complex, and likely varies a lot between the states.  And the question really assumes something that isn't true: Oregon, for instance, no longer has a single state system, and some states have several.  But the question--Why is there a University of North Carolina and a North Carolina State University--is a good one.  This question might be asked of several of the states, all indicated on the map above; these are the states with both a flagship university and a land grant university.  Other states (Wisconsin, Illinois, and Minnesota, among others) have one university that serves as both a land grant and a flagship.  At least by my definition.
While the original land grant universities created by the Morrill Act of 1862 are well defined, "flagship" is not an official designation in the same way.  Some might say the flagship is the oldest public in the state (and in many states, it is).  Some might say it's the largest (but of course that can change from year-to-year); again, in some states the flagship is, in fact the largest university in that state.  But neither of those definitions would put the University of Virginia as the flagship in that state.
So my definition of flagship is generally the university that carries the name "University of <insert state name here.>  I understand some people disagree with this.  And I understand that California might have a debate between Berkeley and UCLA (both of which are considered land grants). Some people can get their own blog and offer their own opinions.
The histories in the state may include college charters based on special missions, geography, or the need for specialized programs.  As is often the case in America, there is no rhyme nor reason.  But is there a difference?
As I suggested above, the map at the top of this post includes the states where the flagship and the land grant are different institutions: Michigan, with the University of Michigan and Michigan State.  Or South Carolina, with the University of South Carolina and Clemson.  You get the picture.  And in those states, there are often differences between the flagship and the land grant institutions, and much of that is based on differences in degree programs.  So take a look, below.
There are three views on this visualization:
Overview by Land Grant/Flagship shows the number of bachelor's degrees awarded by very broad degree rollups (which are my creation).  You can see that land grants award more stem degrees; flagships more humanities degrees, for instance.  Choose a state at top left to filter.
Choose a State to Compare shows the data at a more granular level.  The view starts with Alabama, but you can choose any of the states shown on the map above.  Use the highlight tool to emphasize that are in the view, and hover over the bars for details.
Compare Two allows you to choose a land grant university on the left, and a flagship university on the right (they don't have to be from the same state, but our view starts with Oregon).  You can see all the bachelor's degrees awarded in 2019-20, sorted by frequency, and colored by broad area.  This might give you the biggest insight into the differences between and among the institutions of different designations.
As always, let me know what you see as you interact with the visualization below.

On Rankings, 1911, and Economic Mobility

January 28, 2022
If you're alive today, you have lived your whole life with college rankings.  Yes, even you.  You may not have knows you were living in the time of college rankings, but indeed, you have been, unless you were born before 1911 (or maybe earlier.)  If you're interested, you can read this Twitter thread from 2020 where I discuss them and include snippets of those 1911 rankings as well as those from 1957, written by Chesley Manly. You can read for yourself, or you can trust me, that in fact the rankings as we know them have been surprisingly consistent over time, and most people would have only minor quibbles with the ratings from 1911.  Perhaps that's because they have always tended to measure the same thing. But what if we did different rankings?  No, not like the Princeton Review where they make an attempt to measure best party school, or best cafeteria food, or worst social life.  Something more quantifiable and concrete, although still, admittedly, a hard thing to get rig
Post a Comment
Read more

October 01, 2021
(Note: I discovered that in IPEDS, Penn State Main Campus now reports with "The Pennsylvania State University" as one system.  So when you'd look at things over time, Penn State would have data until 2018, and then The Penn....etc would show up in 2020.  I found out Penn State main campus still reports its own data on the website, so I went there, and edited the IPEDS data by hand.  So if you noticed that error, it should be corrected now, but I'm not sure what I'll do in years going forward.) Freshman migration to and from the states is always a favorite visualization of mine, both because I find it a compelling and interesting topic, and because I had a few breakthroughs with calculated variables the first time I tried to do it. If you're a loyal reader, you know what this shows: The number of freshman and their movement between the states.  And if you're a loyal viewer and you use this for your work in your business, please consider supporting the costs
Post a Comment
Read more