July 01, 2015
The Federal Government released its Tuition Transparency Ratings today, to help students and parents find out how fast colleges are raising tuition and net price.  And as is the case with many well-meaning government programs, the data doesn't always tell you the whole story.

The top chart on this visualization show tuition and fees at about 6,000 colleges and universities; the light blue bar is 2011, and the orange square is 2013.  To the right is the two-year percentage increase.  If you want to limit your selections or sort the colleges differently, take a look at this image, which I've embellished with some instructions.  Click to view larger. 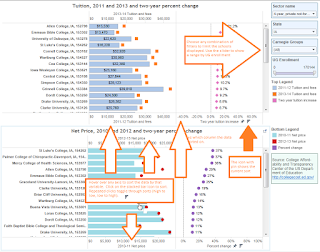 The second chart, at the bottom, shows net price for 2010 and 2011.  Net price is calculated after grant aid, which is only reported at the end of the year, which explains the delay.  It's pretty much the same: 2010 on the aqua bar, 2012 on the red dot, and percent change in the purple circle.  The filters and sorts work the same way on this one.

There are a couple of problems here: One is the data.  I could not find a single program on the New England Culinary Institute website that listed a tuition of $88,000, but that's the data shown here. There are several instances like that in this data; even if they are technically accurate because of the way a program is configured, it doesn't advance our understanding of the issue much.

But more important, net cost is a function of who enrolls and how much aid you can give: If you suddenly stopped enrolling middle-income students, or you have small enrollments, the results can be very volatile. Net cost is a remnant, not a target that can be tightly controlled.  And, it seems in many instances net cost is being calculated by different people in different ways over the two-year period.

Still, there is some good stuff here, I think.  Take a look and let me know.