How Admissions Has Changed, in One Chart

March 31, 2015
I frequently hear that the interactive charts I publish are too confusing or time-consuming, and that it's hard to get the story out of them without some work. So today, I'm making it easier for you, for two reasons: First, this is real student data, not summaries: Each dot represents a student who applied for financial aid, so I'd never publish that data on the web; this is just a good, old-fashioned picture of a chart.  Second, in this case, one chart tells the whole story.

The population here is all freshman financial aid applicants who completed a FAFSA but did not have need.

Each column is one year, and each dot in that column represents a student; higher positions in the column show higher income, from zero to one million dollars in parental AGI (adjusted gross income).  This is arrayed in a box-and-whiskers, or box plot.  The yellow boxes show the limits of the middle 50% of the distribution (the "box") with the color break representing the median.  The top whisker (the black horizontal lines) represent the 75th percentile.  In other words, 25% of the applicants have incomes above that line.  The bottom whisker is the lowest 25th percent. Yes, there are people with very low incomes who do not qualify for need-based aid, usually due to large asset bases.

Note the way the black line rises over time, from about $430,000 in 2007 to almost $600,000 in the last two years.  There are several possible explanations for this, all of which are probably valid to some extent.

This post shows Financial Aid data, but the title says it's about how admissions has changed. What do you think? How are the two related? 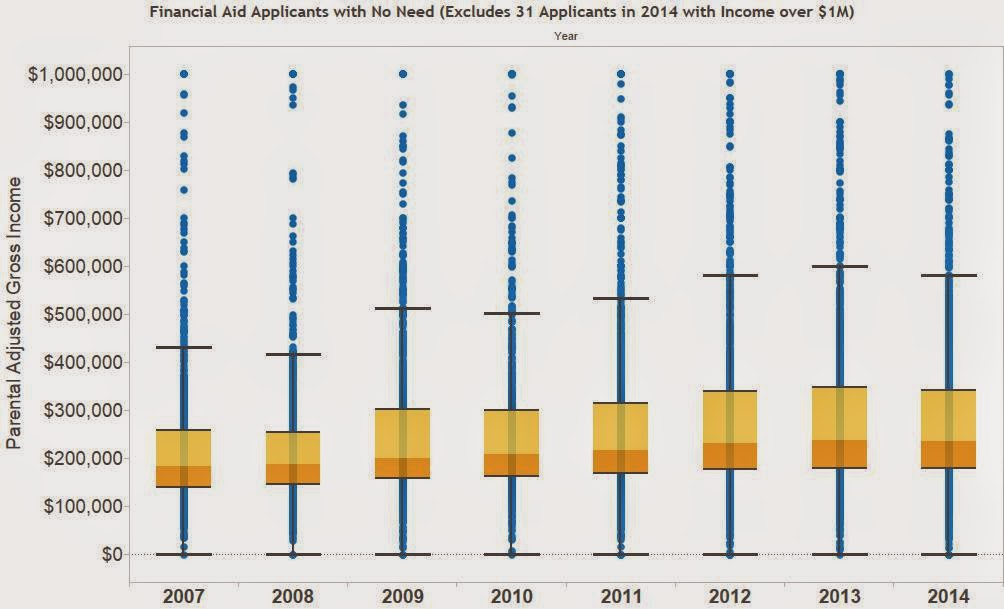