February 05, 2015
There are a lot of bad infographics floating around the Internet.  When they concern things like the difference between cats and dogs, or how many hot dogs and hamburgers Americans eat over the 4th of July, it's no big deal.

But this blog is about higher education data, and when I see bad infographics on that topic, I feel compelled to respond.  This one is so bad it's almost in the "I can't even," category.  It takes very interesting and compelling data--The graduation rates of Black male athletes--and compares it to overall graduation rates at several big football schools in the nation.  Here it is: 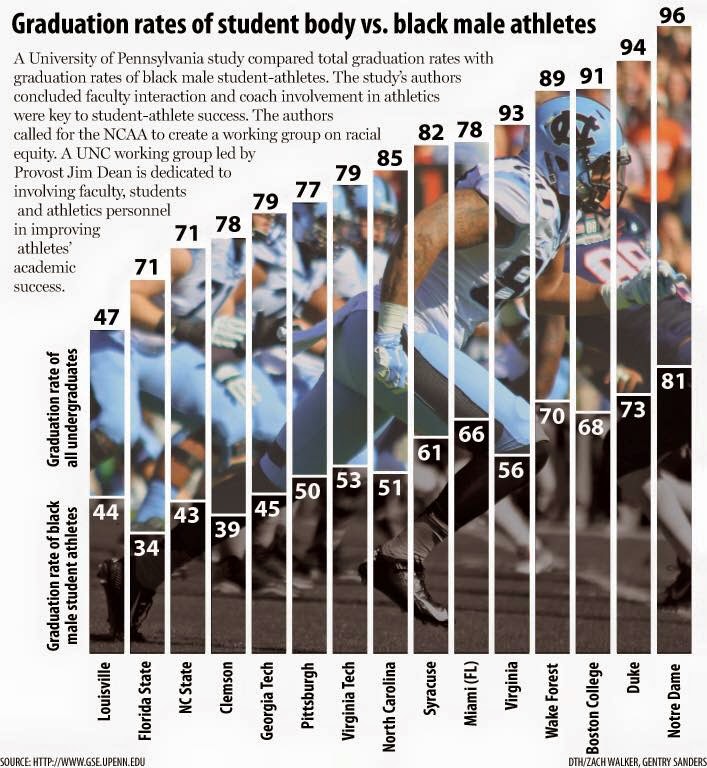 For starters, this chart appears to stack bars when they shouldn't be stacked: A graduation rate of 40% for one group and 40% for another group shouldn't add up to 80%.  The effect is that it distorts much of what your brain tries to figure out.  For instance, look at the overall rates (longer bars) for Georgia Tech and Pittsburgh;  Georgia Tech at 79% is shorter than Pittsburgh's at 77%, because they started at different points.

These also look at first like they could be two sets of bars, with one (the overall graduation rate, which is always higher) behind the Black male graduation rate.  But that can't be, either.  The effect is that you look at Notre Dame and see very long gap between 81% and 96% (a 15-point spread) that appears to be longer than the 37-point spread at Virginia.

In short, I cannot tell you how this chart was made, or what the assumptions are, let alone what the story really is.

And the image behind the picture is even worse; it makes it hard to see.

Finally, a third element might have been interesting here: The graduation rate of Black males who are not athletes.  It might shed more light on the problem, although if the same designer did it, I'd not be confident.

Here's the data presented three ways, each of which tells the story differently, but each better in at least one way. This was literally 15 minutes of work.

What do you think?