Pricing Public Education in the States

May 07, 2014
Everyone is--or perhaps should be--interested in how the state you live in thinks about public higher education pricing.  Even if you don't have a student in your family enrolled in a state institution, you probably pay taxes to support higher education; even if you don't pay taxes, you're probably interested in how your state develops educated citizenry who someday will.

So it's very interesting to look at this data from the Digest of Education Statistics several different ways.  In order to get the most out of this visualization, you must interact, however, and there are only two ways to do so.  Both are very easy.

First, use this control in the middle of the page:

I promise you, you won't break anything.  With this control, you decide what value to show on the bars and to use to color the map (orange is low; purple is high).  It starts off with 2012 Resident Tuition and Fees for Public, four-year universities.  But choose anything: Non-resident tuition, for instance; Resident tuition at two-year colleges; average private tuition in the state; the non-resident premium (that is, how much more does a non-resident pay); the non-resident premium percent (how many times base tuition is the "up-charge" for non-residents; the 2-to-4 year premium (the difference between average two year publics and four-year publics in the state for residents): the 2-to-4 year premium percent (that value again, expressed as an up-charge to move up from a community college to a state university); the in-state private premium (if a student stays in state, how much more does he or she pay for a private university, on average); or out-of-state premium, for students who want to leave the home state but would consider either a public or private university in that destination state.)

Second, you can limit the view to just certain regions, which makes the New England states, for instance, easier to see.  Use this control 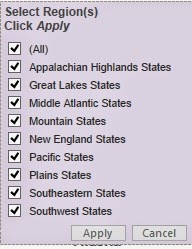 to make those selections to your heart's content.  Both controls work on the map and the bar chart underneath it.  The bottom has a scroll bar on it, and if you show the entire US, you can see the US Average, in blue.

This is at once astonishingly simple and very rich in details.

Some caveats: These are averages, so Michigan does not show Michigan State or the University of Michigan tuition: It shows the average of publics in Michigan.  Things are a little less clear when you compare average publics to average privates, of course, but it's still interesting. Second, these data show sticker price, not the net price.  Even flagship public universities are heavily discounting non-resident tuition, so your results, as they say, may vary.